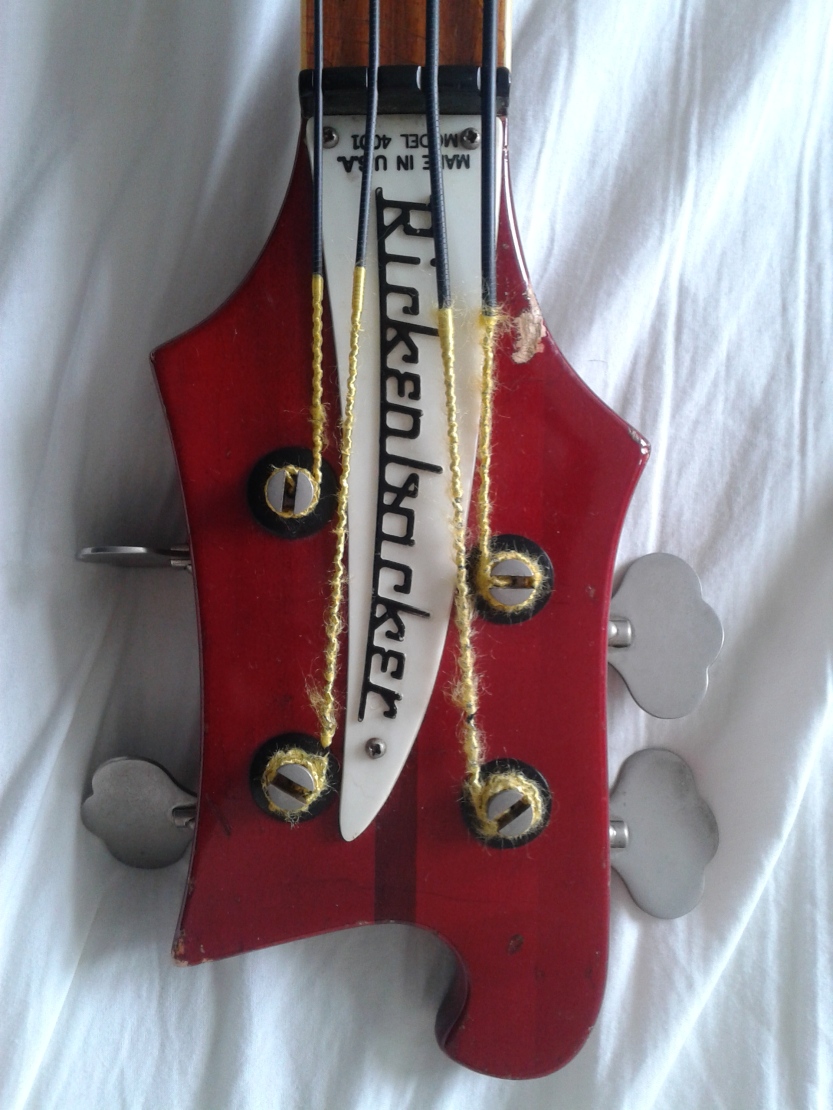 This week the topic of our blog is love, and there is no greater love than that between a man and his guitar. Ricky was not Stephen’s first bass guitar, he’d learned the ropes on a cheap try-out guitar, but by age fifteen, felt it was time to move on. Week after week he’d trawl the guitar shops of Newcastle, looking for the one. He didn’t even really know what he was looking for, but older, wiser heads said, ‘when you find the one, you’ll just know’.

And so it was that he tried out his first Rickenbacker 4001 bass in a vintage guitar shop. He’d heard about Rickenbackers, but they weren’t very common and this was the first time he had seen one in the flesh. While most bass guitars follow a generic Fender styling, the Rick is something else; the build quality is amazing. And when he held it in his arms, he knew this was it; the one. He ran his hands over the sleek curves, along the neck, whose profile could had been built around his hands and the extra hole for the jack plug seemed to offer exciting possibilities. The guitar looked black, but when you tilted it to the light it glowed purple; not what he would have chosen, but it seemed right.

Stephen dashed home and begged his parents to lend him the £600 to buy the Rickenbacker. This was a lot of money in those days (roughly $4.7m in today’s money) and they naturally refused. He implored, pleaded even, but they didn’t understand. There would be other guitars, they said. So now week after week, month after month Stephen now travelled to just one guitar shop to check if his guitar was still there and week after week he worked and saved, until one day he found an empty space where the guitar used to be.

Heartbroken, Stephen returned to his search, his money accumulating all the while so that this would never happen again. Just before his sixteenth birthday he found another Ricky, languishing unloved in a grotty guitar shop off the beaten track. This one had not been treated well. It was scratched, the string mutes were broken, the metal parts rusted and somebody had put strings of wildly different types and gauges on it. And it looked so dirty too, but beneath it all you could see a gorgeous wine red colour trying to get out. Stephen picked it up, and the old feelings came straight back and there and then he promised to take Ricky away from that hell-hole and treat it right. This one cost just £445, but after some fancy haggling he got it down to £440 and even got them to throw in a free plectrum.

When he got home on his sixteenth birthday with his new guitar a friend had come to visit, but seeing Stephen and Ricky he quickly excused himself to leave them alone. Stephen furiously stripped off the filthy strings, rubbed it from head to toe, polished knobs and squirted oil into parts which had rusted through lack of use. Then plugging in, he lay back on his bed and just played around, his guitar making sweet sounds as he did. And he reflected that his parents had been right; something else had come along and something so special too. He felt older and wiser that night, but with severe blistering from excessive neck slides.

Stephen and Ricky are still together and can be heard making beautiful music on the new Candi’s Dog album, out October 2014!

One thought on “I love you Ricky!”